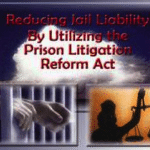 In 1996, Congress enacted the Prison Litigation Reform Act (hereinafter “PLRA”), to “curtail the ability of prisoners to bring frivolous and malicious lawsuits.”1  The sponsors of the bill submitted a “top ten” list, entitled “Top 10 Frivolous Inmate Lawsuits Nationally”. Those included:

Although these claims are humorous, they were expensive to the taxpayers. In each of
these cases, the facts alleged in the complaint were clearly not worthy of a Court’s time, but the taxpayers nevertheless had to pay for the judicial resources used in hearing the matter, as well as the attorneys fees to defend the jails or prisons. Since the passage of the PLRA, Courts are now required to review the allegations of the Complaint before issuing summonses to the defendants.

If the Court determines that the Complaint fails to state a claim upon which relief can be granted, the Court shall dismiss the Complaint, without issuing a summons. This new procedure has drastically reduced the amount of public resources spent in defending these frivolous suits.

In addition, the PLRA has set forth several defenses of which all jail officials should be
aware and utilize to their advantage. The most useful tool created by the PLRA is the
“exhaustion of administrative remedies” requirement. This article will address how County officials can use the PLRA in this regard to their advantage and thereby reduce jail liability.

The PLRA provides, in relevant part, that “[n]o action shall be brought with respect to
prison conditions under section 1979 of the Revised Statutes of the United States (42 U.S.C. 1983), or any other Federal law, by a prisoner confined in any jail, prison, or other correctional facility until such administrative remedies as are available are exhausted.”3   In Kentucky, all full service jails and youth alternative centers are required to have a written policy, setting forth a grievance procedure.4   There is no similar regulation applicable to life safety jails. However, in order to substantially reduce liability, every jail, regardless of classification, should enact a grievance procedure. An example of a grievance procedure, an inmate grievance form, and an inmate grievance appeal form are shown below as Appendixes “A”, “B”, and “C”.

Grievance procedures can limit a jail’s and/or a jailer’s liability in two distinct ways.
Obviously, if an inmate is allowed to file a grievance about a condition of which the jail
authorities are not aware and do not approve, the condition can be corrected and as such, liability reduced. Second, if the inmate fails to follow the grievance procedure, as adopted, any complaint he subsequently files in federal court will be dismissed pursuant to the PLRA’s “exhaustion of administrative remedies” provision. Of course, if the jail has not adopted a grievance procedure, the inmate does not have to jump through any hoops before he files suit and the jail does not get the opportunity to correct the problem before a judge gets involved.

The first step of any grievance process should require the inmate to speak to the alleged offending party, i.e., deputy jailer, medical health professional, etc. If the issue is not resolved at that stage, then the inmate may file a written grievance form, which should be available to any inmate upon request. In the sample grievance procedure, attached hereto as Appendix “A”, the written grievance is to the submitted to the Jailer. It is important that the procedure set forth deadlines for filing a grievance and an appeal. In addition, the procedure should require the Jailer (or other person responsible for responding to the grievance) to respond to the grievance within a given period. Failure to respond within that period should be deemed a denial of the
grievance and begin the clock for which an appeal can be filed. In the attached sample grievance procedure, the appeal is to be submitted to the County Judge Executive or his designee. The Judge Executive could designate the County Administrator, the County Attorney, or the Judge Pro Tem, for example. Failure of the County Judge Executive (or his designee) to respond to an appeal within a given period should likewise deem the response as “denied.” However, in order to avoid liability, both the Jailer and the Judge Executive or other appointed persons, should conduct a limited investigation into the complaint. Failure to do so, could result in a valid claim of deliberate indifference, subjecting the official and/or the county to liability.

In addition, it is very important for jails and/or counties to retain copies of all grievances
and appeals filed by inmates for at least two years. Copies of all responses to the grievances and appeals should also be retained for this period of time. An inmate has one year from the date of incident in which to file a 1983 action in federal court. However, because Courts are now required to review the allegations in the complaint before issuing the summonses, it can now take up to two years for a summons and complaint to be served. Of course, without copies of all grievances filed in the last two years, it is hard to rebut an inmate’s argument that he in fact did exhaust all available administrative remedies.

As such, whenever a jail and/or jailer is served with a summons and complaint, the jail’s
files should be immediately perused for grievances filed by the plaintiff/inmate. If grievances were filed, copies should be made and forwarded to the assigned attorney. If not, the custodian of the records should sign a statement to that effect. Furthermore, the custodian of the records of the County Judge Executive (or his designee) should do the same. This procedure should occur at the beginning of the case, as a Motion to Dismiss for failure to exhaust administrative remedies may be filed immediately.

I have defended over 50 jail liability suits since the passage of the PLRA, of which 75 percent were dismissed due to the inmate’s failure to exhaust administrative remedies. Most inmates are not aware of this procedural requirement and are not willing to “waste their time” with filing grievances and appeals. Of the 25 per cent that did not get dismissed on PLRA grounds, the defending County had either not adopted a grievance procedure or had not communicated such to the inmates.

The PLRA’s exhaustion of administrative remedy requirement may be effectively utilized
to reduce a jail’s liability. In enacting the PLRA, Congress sought to reduce frivolous lawsuits in federal court. Whether county jails use the tool given to them by Congress to their advantage, is up to them.

Other Articles by Stacey: